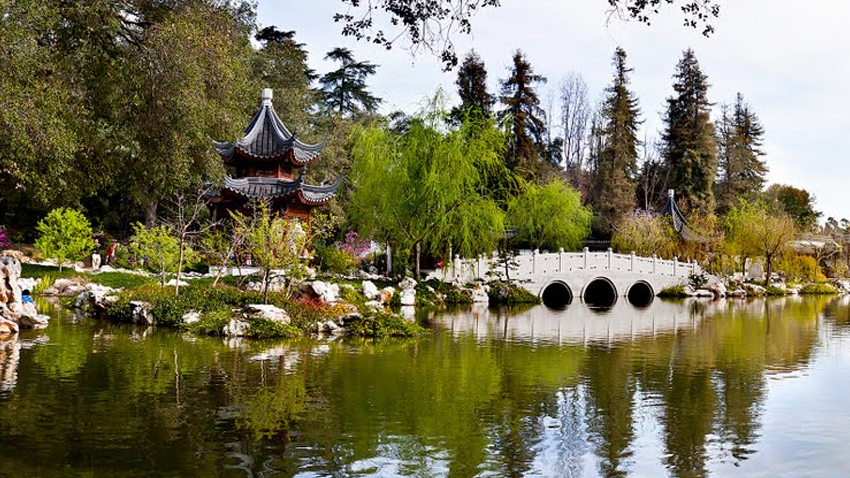 Los Angeles, Pasadena, San Marino, and Corona Del Mar are just a few of the beautiful locations that play host to some of the Southern California's most prestigious collections of art, botanical gardens, and more. Let us take you on a tour of the many amazing sites

The Huntington Library, Art Collections and Botanical Gardens is a collections-based educational and research institution established by Henry E. Huntington (1850–1927) and is located in San Marino, California.

Housing an extensive art collection with a focus in 18th and 19th-century European art and 17th to mid-20th-century American art, The Huntington is home to such well known great works of art such as: The Blue Boy and Pinkie. The property also includes approximately 120 acres of specialized botanical landscaped gardens, most notably the "Japanese Garden", the "Desert Garden", and the "Chinese Garden" (Liu Fang Yuan).

A notorious miser with a wealth of over $1.2 billion in 1966, Jean Paul Getty KBE (1892 – 1976) was an American industrialist who founded the Getty Oil Company. In 1957 Fortune magazine named him the richest living American, worth an estimated $1.2 billion and approximately $8.8 billion in 2015. In 1996 a published book ranked him as the 67th richest American who ever lived.

Getty was an avid collector of art and antiquities; his collection formed the basis of the J. Paul Getty Museum in Los Angeles, California, and over $661 million of his estate was left to the museum after his death. He established the J. Paul Getty Trust in 1953.

The trust is the world's wealthiest art institution, and operates the J. Paul Getty Museum, the Getty Foundation, the Getty Research Institute, and the Getty Conservation Institute.[7]

After receiving approximately 400 German-Expressionist pieces from collector Galka Scheyer in 1953, the Pasadena Art Institute changed its name to the Pasadena Art Museum in 1954 and occupied the Chinoiserie-style “The Grace Nicholson Treasure House of Oriental Art” building (now the Pacific Asia Museum) on North Los Robles Avenue until 1970.

The Museum filled a void, being the only modern art museum between San Francisco and La Jolla in California at the time. It was renowned for progressive art exhibits and supported the work of local contemporary artists such as Helen Lundeberg, John McLaughlin, and Sam Francis. In 1962, curator Walter Hopps arrived from the Ferus gallery, organizing an early Pop art show in 1962 and a Marcel Duchamp retrospective in 1963, as well as solo shows of the work of Kurt Schwitters and Joseph Cornell.

The observatory is a popular tourist attraction with an excellent view of the Hollywood sign, and an extensive array of space and science-related displays. Since the observatory opened in 1935, admission has been free, in accordance with Griffith's will. However, some planetary shows inside have a small added charge.

The Sherman Library and Gardens are botanical gardens located at 2647 East Coast Highway, Corona del Mar, California. They are open to the public every day but major holidays; an admission fee is charged most days.

The gardens include patios and conservatories, seasonal flower beds, and fountains. Collections range from desert plants to tropical vegetation. The Cactus and Succulent Garden includes a California pepper tree. A tropical conservatory features orchids, heliconias, and gingers. The Rose Garden features roses, the Fern Grotto exhibits mature staghorn ferns, the Japanese Garden includes a bo tree, and the Herb Garden shows a variety of herbs. The Gardens provide a tranquil environment simply to be enjoyed for the beauty or, if desired, a place to observe and study firsthand plant life from various parts of the world.